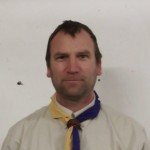 Bart started as a Cub here then left to grow up, but it didn’t work so he came back. In his apprenticeship phase, Bart worked as a parent helper assisting previous Akelas, then an occasional helper and then an assistant leader. In the ‘real world’, he’s done lots of lively outside work from crab fisherman to motorbike courier to roofer, although these days he’s playing it safe as a water softener engineer in a local family business.
Favourite activity: Anything outside
Least likely to say: Since you all found the six-figure grid reference easy, we can play some games 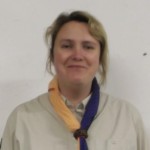 Claire got involved with Cubs after being begged by her eldest son to help “as they needed more girls”. She came along as a parent helper in 2013 and was hooked. Away from the hut, Claire is an Environmental Health Officer managing the pest control team for Wiltshire Council. Her Scout name means rat!
Least likely to say: Let’s practise some knots
Most likely to say: Shall we have some hot chocolate?

It could be you!
If you would like the opportunity to do something you’d never thought of doing, while having lots of fun and giving back to the community at the same time, please get in touch – we can always do with more leaders! You don’t have to be an expert in all-things-scouting – the only essential ingredient is wanting to have fun scouting!

No patrols could be found.